In May one of our ex-students, Linda Walker who is a Therapeutic Arts Facilitator at the Heart of Kent Hospice worked with the Day Therapy Patients to help them produce an Art Exhibition. Here Linda talks about her experiences.

To coincide with “Dying Matters” week, a nationwide coalition aiming to promote a greater public awareness of dying, death and bereavement, I was honoured to be asked to organise an exhibition of the artwork that the Heart of Kent Hospice’s day therapy patients have produced, since I began working there in January.

To begin with, I was a little unsure as to how the patients might react to their work being included in an exhibition. I thought it might intimidate some and that they would withdraw from the art table and not wish to paint any more, for fear of not being “good enough”. So I broached the subject sensitively and made sure that I approached the idea with enthusiasm and much positivity.

I needn’t have been concerned at all as they absolutely embraced the idea; more than that, they were thrilled! They were delighted that their work was going to be framed and put up on the wall, they were a little incredulous too, that anyone could deem their work worthy enough to be displayed in an exhibition.

Most of the patients that are included in this exhibition have not painted since they were at school, and that, I’m sure they would be the first to agree, is quite a while. The majority have been delighted with their results and in some cases, when they return the following week and I show them what they achieved the week before; it is only their signature on the work that convinces them that the painting was actually theirs. “Did I really do that?” is a question I have heard more than once. They really feel a sense of pride and accomplishment in their artwork, which is really heartwarming.

So, having been given the brief to put this exhibition together, and having obtained individual permission from the patients, the Head of Day Patient Services and I set about choosing the paintings to be included. This was not an easy task as there were many more we could have included but we only had a finite amount of space and we ended up choosing 36 paintings in all. I then had the task of framing and hanging them all which although hard work, was very satisfying to do and see once up on the wall.

The paintings have a soft and tender soul quality to them and, each patient has his or her own style of painting. I chose one such painting for the flier that advertised the event. 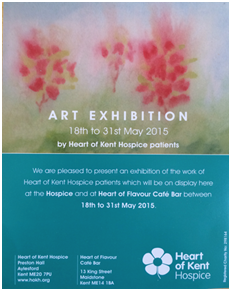 Once we had chosen the entries, and ensured that every person who had, up until that point, created an image with me was included in this selection, I asked each of the patients for the title they would like to give to their image. They approached this task with a great sense of fun and amusement. One example of this was a man who painted a house that was leaning over to one side. He wryly suggested the title, “Walking home from the pub!”

One thing I have observed to be a common, shining thread within nearly all the people I have worked with so far at the Hospice, is the presence of humour. They all have life limiting conditions, and I am constantly amazed by the fact that despite this, or maybe because of this, they are grasping life with both hands while they still can and enjoying every moment of joy and wonder that comes their way.

Naturally they will also have their dark days, it is naïve to think otherwise, so to be a witness to the levity and laughter around the art table is indeed a privilege and I am consistently humbled by the patients’ great strength of spirit and courage.

The exhibition has brought a great deal of joy to the artists themselves, their families and the visitors to the Hospice and the Heart of Flavour Hospice Café in Maidstone town centre, (See images below). There have been many positive and encouraging reviews in the visitors’ books, comments referring to “the diversity and vibrancy and of the artworks”, “an inspiring group of pictures” “Heart warming art”. Several people have even asked if they could buy the paintings. We will be offering the patients their own work to take home once the exhibition is over, but selling the artwork is something we may consider as a fundraiser in the future.

I have included here a few photos of the exhibition. To say this experience was a pleasure for me would be an understatement; I absolutely loved it! 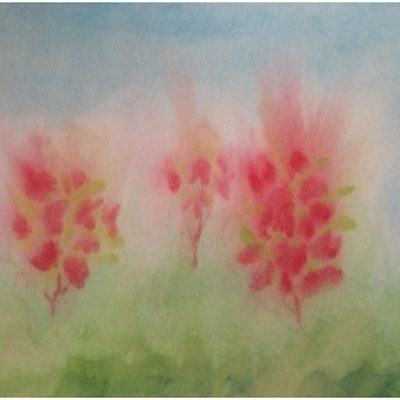 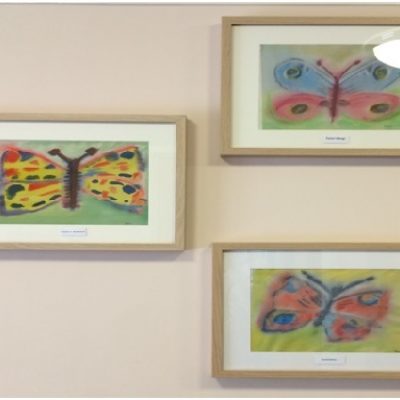 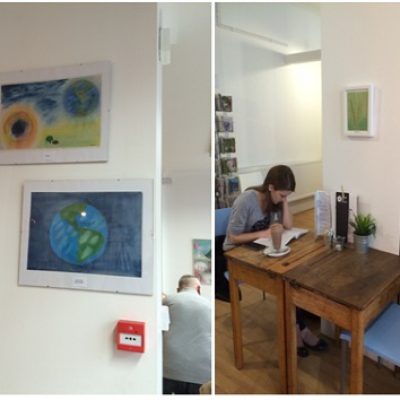 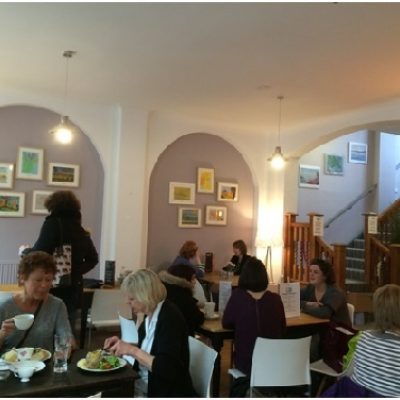 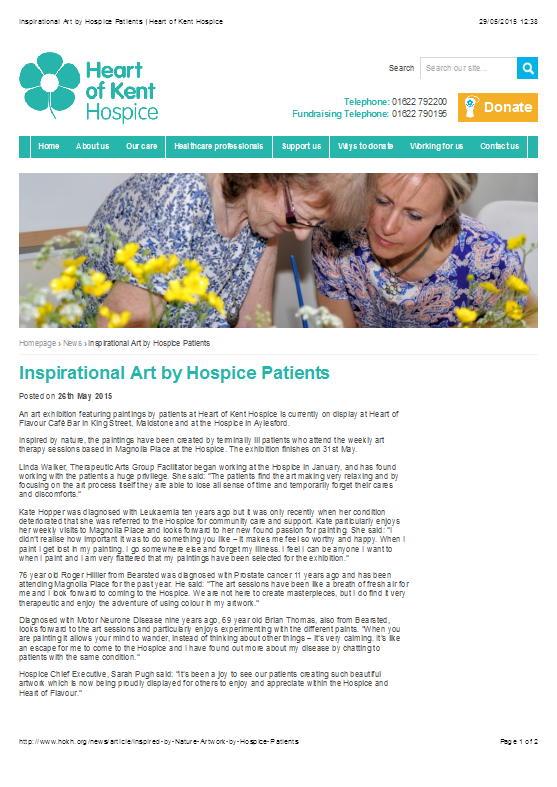